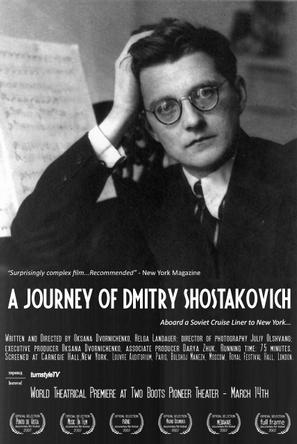 “The Soviet Union’s most famous composer took a sea voyage to America near the end of his life. This remarkable documentary is structured around his days on a Russian cruise ship in 1973. Soviet historical and propaganda footage form a visual counterpoint to a world-weary narration. Ample quotations from Shostakovich’s writings give a window on his life story, which also spans twentieth century musical and world history. Unusual footage from his musical works, such as the operas The Nose and Lady Macbeth, are highlights in an elliptical and experimental tour-de-force”.

To Buy a DVD

“An artful mix of archival footage, classical music and spoken selections from the composer’s letters and diaries, A Journey of Dmitry Shostakovich may strike a responsive chord with venturesome auds who frequent film-series screenings at museums, college campuses and other not-for-profit venues…”

“Structured around a 1973 Soviet propaganda cruise to the United States that Shostakovich participated in two years before his death, this movie parallels the ocean voyage with his personal journey from child prodigy to bitter tool of the Politburo…”

Dmitry Shostakovich, the greatest composer of 20th century remains one of its biggest mysteries. The nine chapters of A JOURNEY OF DMITRY SHOSTAKOVICH are framed by nine days of the last round-trip journey of the composer’s life: a trip on a Soviet ocean liner to the United States.  The film is narrated primarily in words of Shostakovich’s letters and diaries, which sharply contrast with the propaganda movies shown on board the ship, as the twentieth century itself weaves myth and reality. Never-before-seen archival fragments of the composer’s life–newsreel footage, photographs, letters, and personal memoirs–provide a unique perspective on issues of the artist versus the state, and truth versus survival. In contrasting official truth with personal truth, the film offers insight into the mystery of how Shostakovich was able to penetrate, through his music, the ironclad curtain and deeply affect Western audiences. Shostakovich’s music, full of dark sarcasm and glory, lyricism and sorrow, laughter and melancholy, plays the leading part throughout the film.