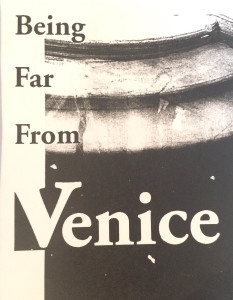 This film was born of the premise that some themes – such as death, being, longing for the past – are best approached indirectly. Some images are clearer in reflection. Venice itself, one of the most-visited yet least accessible spots on the earth, serves as an ideal metaphor for this thematic landscape. Being Far From Venice contains no footage of the city itself. The film seeks to surround rather than sportlight the cultural and existential dimensions of the city and the singular role it has played in the lives and imaginations of the heroes and heroines of the documentary. Venice is the muse for their extraordinary stories; she exists as the invisible presence evoking the path not taken.